A Message regarding COVID-19

Our Cave and Lighthouse tours have reopened, and we are excited to be welcoming visitors again. The Margaret River Region Caves and Lighthouses will operate within the Health Department’s COVID-19 recommendations to protect staff and visitors.

What are we doing?
- Cape Leeuwin Lighthouse has reduced the capacity on guided tower tours
- Increased the cleaning of all high touch areas
- Implemented hand sanitiser stations throughout
- All staff have completed Covid-19 specific hygiene training

What is asked of you?
- Pre-book your visit online to avoid disappointment
- Encouragement to pay contactless by card for items purchased at the site
- Respect the social distancing of staff and other guests when you visit
- Have an amazing time!

As the tallest lighthouse on mainland Australia, Cape Leeuwin Lighthouse is a must-see attraction. This historic lighthouse is situated at the most south-westerly point of Australia, at the tip of a spectacular peninsula - where the Southern and Indian Oceans meet.

Take a trip through maritime history and learn how this famous landmark was constructed from local limestone in 1895, and is still a vital working lighthouse for vessels navigating the treacherous cape. It's also one of the best land-based vantage points for spotting whales from May - September!

The new Interpretive Centre, housed within one of the original lighthouses keepers' cottages, is an outstanding interactive experience that celebrates the history and lives of the numerous lighthouse keepers who were custodians of this rugged coastline.

Visitors can also enjoy a coffee or delicious light refreshments in the Cape Leeuwin Lighthouse Cafe. 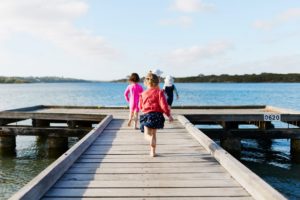 The Best Family-Friendly Things to Do in Augusta

Family Friendly AugustaThe quintessential seaside holiday - and all the best things to do with kids. How does your ideal seaside holiday look? If it’s a country town filled with sleepy streets, laid back service with a country smile, a soundscape of waves lapping the shore, ocean views at every turn, and a heap of kid (and...

What's On in January?The endless summer days are here and new year’s resolutions are fresh. 2021 is FINALLY here and it’s time to celebrate! You can give yourself a pat on the back. Well done, you made it through 2020 – that’s no mean feat. If you are lucky enough to ring in the new year in the little slice of...

Augusta's Best Kept Secrets Follow Caves Road south and you'll discover a place of natural beauty with many hidden secrets Spend a few hours in Augusta and the laid-back locals reveal its best kept secrets; the wonderful spots to play, swim or walk. The town itself feels a little like Yallingup 25 years ago; surf shacks and...

9 Virtual Experiences to get your Margaret River Region fix

9 Virtual ExperiencesTake a Virtual Tour of Your Margaret River Region Missing encounters with nature, tasting Margaret River wines, or perusing the work of the region’s local artisans? If your daily suburban stroll isn’t quite enough, we’ve gathered nine of the best virtual experiences for you to partake in from your ...

7 Days of Summer in the Margaret River Region


This itinerary can be tailored specifically to your travel dates and interests. Please contact Central Reservations on +61 8 9780 5911 or enquire below.

This itinerary can be tailored specifically to your travel dates and interests. Please contact Central Reservations on +61 8 9780 5911 or enquire below.

15
Dec
2020
A very interesting location, fantastic views over where the Southern Ocean and the Indian Ocean meet. From May to October this is also a good whale watching location. many of the original buildings have been faithfully restored which gives a great insight to what life was like at Cape Leeuwin. Graham Jackaman
16
Jan
2021
It was well worth the visit. Friendly guide. Stunning views, and awesome history. Kid friendly if they can handle the height. Safe Catherine Dimitrov
01
Dec
2020
Had a beautiful day to view the lighthouse. Very interesting stories of the lighthouse life for the families. Guides were very helpful and friendly providing lots of extra info. Well worth a visit! Lorraine M
20
Jan
2021
Cape Leeuwin Lighthouse was constructed by a company led by M. C. Davies, with George Temple Poole supervising the construction of the light and designing the keepers' quarters. The light tower which is built of local stone was originally designed to show two lights – a higher white light and a lower red light. Although the foundations were completed, the lower light was never installed. It was opened with great ceremony in 1895 by John Forrest, the Premier of Western Australia. Until June 1982 the lens was rotated by a counter weight driving clockwork mechanism, and the beacon was a pressure kerosene mantle type. A radio navigation beacon was commissioned in 1955 and operated until 1992. The lighthouse was automated in 1982. The lighthouse, besides being a navigational aid, serves as an important automatic weather station. The lighthouse's buildings and grounds are now vested in the local tourism body and the single (1960s) and double (1980s) communications towers that were north-west of the lighthouse, seen in older photographs of Cape Leeuwin, have been removed. Shaoping Sun
17
Jan
2021
Spectacular views and beautiful spot for family tour. Good fitness climbing the ladder up. Definitely worth the visit Benjamin Mansell
Stay Up To Date Subscribe